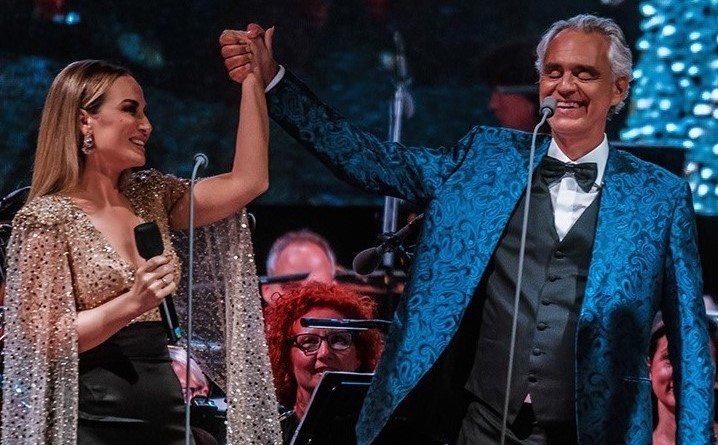 Jelena Tomašević-Bosiljčić is a pop singer from Serbia, one of the most popular singers on Balkan peninsula. Her international career is famed for her strong vocal performances and numerous awards for her interpretations, singles, albums and hits. She represented Serbia at 2008 at Eurovision Song Contest, coming sixth with the song "Oro" in the final. Republic of Serbia awarded her with Golden badge for contribution to culture.

Her voice is also famous for traditional archive recordings for national radio station.

Jelena was born in 1983, and already at the age of seven she won the top award at the children's music festival "Šarenijada" in her hometown Kragujevac. Three years later, she became the winner of the Yugoslav Children's Festival. After becoming a member of the Folklore Ensemble in Kragujevac, one of the most successful Serbian traditional ensembles, her music career soared. She achieved tremendous results at the most prestigious festivals in Serbia, but also in Central and Eastern Europe (Czech Republic, Belarus, Bulgaria etc.) At the Folklore Festival of Serbian Ensembles she won the award of the best vocal soloist.

In those years, Jelena emerged on the Serbian music scene and her career as a pop singer started to take off. She competed and won over the jury in an Idol style show, called "3K dur" aired on National television of Serbia with the aim of promoting young talented artists, and after that success she started collaborations with famous Serbian musicians and composers.

Jelena graduates at University of culture and media in Belgrade.

Her career began to move upward with her victory at 2005 Serbian song contest Beovizija. She released her first album "Panta rei", which will soon become the best-selling and most listened-to album in the region. Her voice became known in Europe when she won National competition for Eurovision 2008 with the song "Oro" by Željko Joksimović, with whom she performed at Eurovision 2008 and won 6th place in the final. The song "Oro" was sung in Greek, Portuguese and Spanish, thanks to which Jelena held concerts in those countries, but through whole Europe and wider: Paris, Barcelona, Lisbon, Trieste, Toronto, New York, Athens, Copenhagen, Oslo, Moscow, Brussels, Zurich, Wien...

Her second album "Ime moje" ("The name of mine") repeated the success of first album and also become one of the most popular and awarded from audience and media. Jelena has a lot of performances with Big brass orchestra from Novi Sad throughout whole region.

She sang the soundtrack to the famous movie "Ivkova slava". The film pulled in a record number of viewers. Jelena took part at the musical "White cranes" held in Belgrade. In 2015 the musical was performed in Minsk. She also participated in synchronization of animated films, such as "Little Prince ".

She is member of jury for years at famous TV show for young talents "Pinkove zvezdice" (Little stars).

In 2022, Jelena had the honor performing as a pop guest at the concert of world famous tenor, maestro Andrea Bocelli at his concert in Belgrade. At the "Belgrade River Fest 2022" festival they sang together two of his hits "Vivo per lei" and "Canto della terra", and Jelena also performed the traditional song "Gde si bilo jare moje", with which she represented Serbia’s cultural heritage.

Her third album is going to be realised this year.

She is married to one of the most famous serbian actors Ivan Bosiljčić. Together they have daughter Nina.